Take the most COMFORTABLE, EFFORTLESS shower even you are in a camping or on a road trip! NOTE: Product color may slightly vary due to photographic lighting sources or differences in monitor settings. If you don’t have a positive shopping experience with Just Emporium Store, we will do whatever it takes to make sure you are 110% delighted and satisfied with your purchase.

Shopping online can sometimes be a daunting task, so we want you to know there is absolutely zero risks in purchasing something from Just Emporium Store and trying it out. If you don’t like it, no hard feelings, we’ll make it right.

We aim to be the #1 provider of the best quality online shopping experience for you. We are 110% committed to making sure you are completely satisfied. 🙂 We have 24/7/365 ticket and email support. Please contact us if you need assistance. We are here for you!

Our electric water heater died, so we took the opportunity to transition the house to natural gas. The program we're doing it under has a backlog of three weeks, so a month of cold showers was not going to happen. I found this solution and let me tell you, while beggars can't be choosers, this simple battery-operated shower is pretty impressive.

We use a 7 gallon trash can, mix about half cold half boiling water from a spaghetti pot until it's 110 degrees, and I can take a full, relaxed pace, normal shower with a good bit of luxuriating in the warm water at the end.

It's a respectable pressure. It won't blastt the soap from a thick head of hair, but it's a shower. About half the pressure of a normal low flow. Keeps me warm and happy.

Most impressive, though, is the battery length. I keep forgetting to count the showers, but one of the two battery packs will do six or more showers on a charge at least. Nice, long showers. And there are two battery packs.

The hose reaches from the bottom of the bucket to the height of a regular shower head. The on/off switch on the batter pack reaches halfway up the hose for easy reach.

So. 5 stars. For a battery-powered shower I'm thoroughly satisfied.

K
K.
If you live off the grid, this is the best shower for you

We have had this portable shower for a little over a month now. We are building a shipping container house but in the meantime we are living in a camper on the property as we build. Sadly the camper we bought doesn’t have a working water heater or even any working gas lines. So I came up with the idea to make a rocket stove out of a 5 gallon bucket, put in coiled copper pipe with both ends sticking out the side of the bucket and put 4inch pvc pipe in the middle and connected a second piece of pvc pipe to that on the other side and poured concrete around it all. We then got 2 more straight pieces of copper pipe, attached them to both ends of the copper pipe in the bucket and heated the other ends and poked them both into a 25 gallon plastic barrel. We then gather a bunch of twigs and break them up and put them in the middle of the rocket stove and light it on fire. To heat up 25 gallons for all 4 of us takes about 2 hours or less depending on how hot you keep the fire. That creates a vortex in the copper pipe and it automatically sucks the cold water from the bottom of the barrel through the copper pipe, heats the water up as it goes around the coiled pipe in the fire and spits out the hot water back to the top of the barrel. We did cut a square on the side of the barrel to be able to put our arm in and be able to stir the water with a big spoon so the kids don’t get any hot spots that burns them. We then drop the kedsum portable shower in the opening where you unscrew one of the lids in the top of the barrel and hang the shower head and removable piece for the hook and suction cup on a screw on a 2x4 we stood up in a hole in the ground. We put rope around 4 trees and then used about 6 white shower curtains on the ropes to enclose the area and then screwed the shower curtain corners to tree limbs we put around the bottom so they don’t blow open. We left an opening to go in and out of, and it’s big enough to keep a plastic folding chair, to sit on in the corner to undress and dress. We added a couple of hanging shower organizers for all our soaps and razors and a folding beach sand rubber mat as the shower rug to stand on and run the water into our garden and yard area to water everything. It works great and we use it every other day. I also use it to put in another barrel to fill up our washer until we get our well done. If I take the shower head off and just use the hose part and battery it takes about 9 minutes and 45 seconds to fill up the washer. If you live off the grid and use those huge water containers that holds about 200 gallons of water or even the barrels that holds 25 gallons of water it makes life so much easier. My husband actually wants to keep the outdoor shower I created once our house is done and move it to off our master bathroom so we can still take showers outdoors together if we want. I also hung a couple of solar power little lanterns I got from Joanns craft store so we have light in the shower but not enough that if anyone happens to wonder by our property in the middle of the woods they can’t even see a shadow let alone anything else in the shower.

Works great the only thing I would adjust would be an on off switch on the shower head. We had a gas leak and the Gas company turned our gas off while it was being repaired which basically meant we had no hot water for several days. We were able to boil water in a pot and use this in our normal shower which was a good thing for both me and my wife since we were able to avoid taking frigid cold showers while the gas line was being repaired. It had great water pressure and the only thing I would improve would be the on/off switch being closer to or on the shower head. 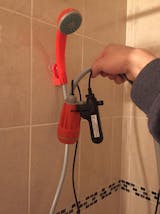 I got this as a hand-held bidet. It’s about time this country got smart about such things!! Works great, and I hope this review shows up when anyone searches on TOILET PAPER 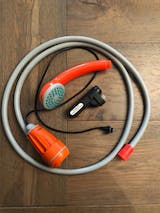 D
D.
OMG this is amazing!

We went and camped in the smoky mountains for a week. The campgrounds there have no showers. I used this, a shower tent, a 6 foot chunk of 3/4 inch pvc pipe (for a shower head holder) and a 27 gallon storage tub. There was potable water there. So I filled up the tub, then took 5 gallons out and heated it up in a propane turkey fryer. This worked flawlessly. Plenty of water comes out, it runs at a decent pressure, overall I was thrilled with this. how long will it last? no idea, but i made it through 3 showers a day over a week, so at least 21 showers. lol

Really the 27 gallon tub was overkill, after 3 showers we only used about half the tub. seems like it does a bit less then a gallon a minute.

I wish the cord was a bit longer, maybe add a foot to it. But it was fine.